The Making Of A Sturdy And Secure Autonomous e-Two-Wheeler

For a country like India, where more than half of the population is dependent on
two-wheelers, enhancing these vehicles will be nothing short of achieving the dream
of implementing autonomy on a wider scale.

Two-wheelers have been an integral part of the Indian lifestyle for many years. While the public can smoothly go about its business, tourists can easily traverse the length and breadth of this vast country with these vehicles. Even Bollywood has been hugely influenced by it, so much so that many key scenes have involved a two-wheeler in action.

In America and Europe, self-driven cars are quite popular, and you see very few two-wheelers on the road. The two-wheelers are used there mainly for leisure and sports. In India, two-wheelers are the lifeline of our transportation system. They are much less expensive here, so more people buy them.

But maintaining a smooth traffic flow due to the huge variety of vehicles on the Indian roads is a challenge for the authorities. Building more lanes and flyovers helps, but for a country like India their construction remains slow due to monetary constraints.

Two-wheelers occupy lesser space compared to four-wheelers, so more people can utilise each lane. Thus, there is lesser requirement for new lanes and flyovers. Therefore, in the future, when the traffic is not likely to reduce, the situation can be better tackled by using two-wheelers instead of cars.

The two most prominent models for on-road self-driving mechanism are autonomous cars and autonomous two-wheelers. The software tech stack remains largely unchanged irrespective of the robot model used. Effectively, every self-driving vehicle looks at the surroundings through its eyes, which include onboard cameras and lidars. Whatever is seen gets converted to a digital map. All the captured information gets interpreted using an onboard computer vision that controls the associated orientation and speed mechanisms.

Finally, everything translates into decision making regarding lane changing, lane overtaking, stopping, slowing down, or accelerating. So, by tracking static objects and computing how much you moved, your current location can be determined.

As per the laws of physics, if any stationary object subjected to a dynamic disturbance destabilises, it is called an unstable system; but if it comes back to its stable condition, it is called a stable system. If you push a glass near the edge of a table, or exert force on an upright pole standing on the ground, it would naturally fall down. The same does not apply to four- and three-wheelers, which, when disturbed, do not topple under normal circumstances.

A four-wheeler and a three-wheeler are stable systems when these are standing as well as when they are moving. But in case of two-wheelers, the same is not true. A two-wheeler is stable as long as it is moving. The moment it stops, it becomes unstable and tends to fall down. 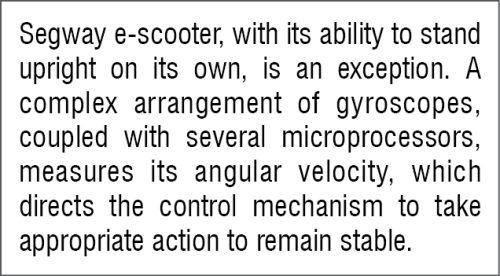 In situations such as traffic stops, riders tend to place their foot on the ground to stabilise a two-wheeler. That is exactly what autonomous two-wheelers would need to do, but automatically. For that, a small leg hidden inside the vehicle’s body gets deployed as soon as the vehicle speed slows down and is not good enough to maintain stability.

A level-5 autonomous vehicle includes many lidars, radars, ultrasonic devices, IMUs, GPUs, battery systems, etc. This leads to its rear bonnet getting jam packed with computing devices and batteries, while the front bonnet is filled with sensors. Due to lack of space, any further expansion/addition to the system becomes difficult. On top of that, the comfort factor of the rider also needs to be kept in mind. You don’t want any electronics or mechanics interfering with the rider’s space.

The solution to this problem lies in removing a lot of onboard hi-tech equipment. Autonomy for two-wheelers does not require a lot of GPUs and lidars. A camera system and a lidar system will suffice. You can do many things with such systems. In fact, several hi-tech sensors are not at all required.

Safety standards for autonomous two-wheelers require rigorous testing for a lot of scenarios. The testing involves a vulnerable road user, such as a child, who can suddenly come up in front of a vehicle.

An interesting thing is that two-wheelers themselves come under the category of vulnerable vehicles for road users. Autonomous four-wheeler cars are trained to detect vulnerable road users and take necessary action. The presence of a large number of two-wheelers on the road significantly increases the accident threat (owing to their vulnerable status). So, all possible efforts are required to make e-two-wheelers safe, which requires extensive research.

Currently, there is a rule: One lane, one vehicle. That is how a lot of accidents are prevented. The moment there are too many hybrid vehicles on the road, you are talking of traffic risks never dealt with before. A self-driving car makes decisions based on the behaviour of other vehicles, for which a lot of behaviour analysis takes place inside the autonomous vehicle. The same needs to be implemented for autonomous two-wheelers as well. 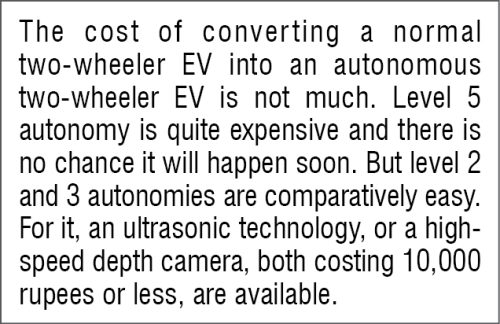 And finally, for all vehicles to communicate with each other using digital signals, you do not need high-profile onboard sensing. Everything can come from a global map of network channels. This way, there is a lot of scope to enhance the communication protocols.

The two-wheeler has its own set of unique challenges concerning safety and operation. So, let us make the two-wheeler brand unique to India and help it shine globally with our R&D.

The article is based on a talk by Dr Rahul Kala, Assistant Professor at the Centre of Intelligent Robotics, IIIT Allahabad. It has been transcribed and curated by Vinay Prabhakar Minj, an IoT and audio electronics enthusiast.