Fake components are a reality. Also, a hot and thriving business. So hot, these chips could get you fried (or ﬁred?)

The global semiconductor shortage is dragging down phone makers and auto makers, and almost everyone in the electronics industry. In this backdrop, fakes thrive.

Thrive, where o’ where? Fortunately, not in the inventories of brand-name component distributors you trust (dwindling as their inventories are). For ﬁrst-hand knowledge, just visit your favourite and trusted component distributor’s web page. For example, Mouser, Digikey, Element-14, or R.S. Components (in no particular order). Now type in a search for your favourite microcontroller family, say STM32F07 to name one. When I tried that, out of the 75 different parts that turned up, only one part number showed up as in stock! The other 74 entries showed zero stock.

Head over to AliExpress, an online marketplace operated by China based Alibaba Group Holding Ltd. Here you can ﬁnd a great number of vendors selling all sorts of wares. Type in a search for STM32F072, and you will see quite a few listings worded ‘New Original,’ ‘100% Quality,’ etc. Prices may not be dirt-cheap but well. (Acquired wisdoms of supply and demand step in to restore your faith.)

And, if your product needed that chip, and your inventories were drying up fast, would you not be tempted to click now on the red button which beckons with a ‘Buy Now’ call?
You don’t see any red, or do you?

The phenomenon is not new. I recall reading, a decade ago, about the famed OLPC Project (One Laptop per Child, founded by Nicholas Negroponte in 2005) encountering problems with fake memory devices. The revered IEEE Spectrum too weighed in on the spectre of fakes. A detailed report by the Center for Public Integrity (USA) dating back to 2011 is full of interesting bits.

In 2012, a U.S. Senate Armed Services Committee conducting an inquiry into ‘Counterfeit Electronic Parts In The Department Of Defense Supply Chain’ (See Senate Report No. 112-167) shed light on “overwhelming evidence of large numbers of counterfeit parts making their way into critical defense systems.”

The report begins with this quote: “We do not want a $12 million missile defense interceptor’s reliability to be compromised by a $2 counterfeit part.” The strategic, human and monetary costs of a compromised supply chain can be beyond reckoning.

Fast forward to 2021. Zero Hedge in their July report draws attention to fakes that are ﬂooding the supply chains. They mention two types of counterfeit chips. The ﬁrst involves used chips taken out from e-waste, repackaged, and then sold. The second variety is chips rejected from a legitimate production line, passed off as good chips. In either case, counterfeits could become embedded in electronic products which are then exported, ﬁlling up overseas supply chains.

The report mentions a commercial district of Huaqiangbei in Shenzhen, China, as “well known for its counterfeit chip dealers.” 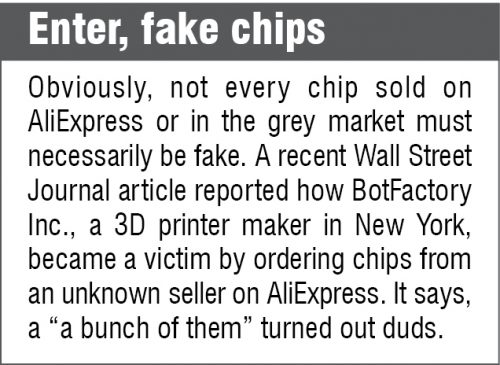 What you can do

As a reputed producer, if your product is shipped out with a fake or substandard part, you are putting your reputation on the chopping block. Depending on the nature of your product, contractual matters, and circumstances, you could well be liable for consequences and/or prosecution.

You might think that if you were not an established manufacturer but a hardware developer, or an R&D house, you are free from such dangers.

In reality, not. You may instead pay in terms of time and money, rather than through liability and loss of reputation. You will suffer lengthy troubleshooting and debugging effort only to ﬁnd that, if only you had used a genuine chip, your creation would have worked as designed.

If you are outsourcing electronic assembly, the burden is still on you to ensure that the assembly house has used the genuine components you supplied (if you did), or that their sources are genuine (if they do the sourcing for you).

In-house prototyping at the R&D stage has several advantages as discussed separately at ‘Prototyping with Surface Mount Technology’ talk at India Electronics Week 2019, Bengaluru. We shall revisit them brieﬂy for completeness.

First, in-house prototyping enables incremental prototyping and partial assembly, allowing progress to be made concurrently on different subsystems or sections of a complex PCB.

When only a few expensive components carry the bulk of the BoM cost, this strategy saves cost. By speeding up turn-around per cycle, development time is also crunched.

When the prototyping is done in-house, the risk of trade secrets and design IP being leaked is also lower. An added beneﬁt is that you are in complete control of the supply chain, which can save you from the scourge of counterfeits.

Why is that important?

In prototyping and small batch assembly, you are often dealing with an entirely new design, with only a few boards to be made as a ﬁrst step. Depending on the maturity and novelty of your design, you could already be dealing with a bunch of unknowns associated to your design.

It is then clearly prudent that only genuine parts be used at the prototyping stage. You will then be able to focus on completing the key tasks of the phase successfully, within budget and in time, than be sent on a wild goose chase all because of counterfeits.

Standards and guidelines can help. JEDEC is a global group that spearheads open standards for the microelectronics industry. In January this year, they have released JEDEC Standard JESD243A, which guides manufacturers on the non-proliferation of counterfeit electronic parts.

JESD243A deﬁnes the features of an authorised chain of custody, and describes measures to ensure supply chain traceability. A conformant manufacturer should put in place appropriate procedures to maintain necessary records, to issue certiﬁcates down the supply chain as necessary, and dispose of and/or report counterfeits as they are discovered.

The Indian electronics industry must take a long-term view and not allow its supply chains to be tainted.

Supply chains can be tainted by unauthorized resellers and grey market actors who help to inject counterfeits into the domestic market, wreaking hard-to-trace havoc. With the volume of e-waste processing in India on the uptick, authorities need to worry about the emergence of domestic counterfeitors and their conduits.

While the 2012 U.S. Senate Report had traced the lion’s share of suspect counterfeit parts to China, India was listed at the seventh position among all source countries. Since fake parts can cause extreme and widespread harm to the industry, to society and the world at large, our regulators and policy makers should pay special attention to this topic.