Milan-based Reveria Studio has renovated the interiors of an elegant villa at a Lake Como hotel to echo the cinematic but welcoming nature of traditional Italian houses.

The studio updated the interiors of Villa della Quercia, which is a standalone villa within the Mandarin Oriental Lake Como resort hotel in Italy.

Each room was renovated to reflect the colours and atmosphere of Lake Como as well as the traditional principles of Italian design.

“Italian design is, above all, the foresight to make rooms welcoming and comfortable – making you feel like the protagonist of a scene from a [Federico] Fellini film, and at the same time, a guest in a friend’s house.”

A palette of both deep greens and warmer, more neutral tones defines the villa, while local Cipollino and Emperador Light marble, dark wood and burnished brass feature in the design.

Light-coloured walls have been adorned with a geometric metal structure from which various artwork, mirrors and other decorative elements can be flexibly hung, while wallpaper created with traditional Como silk also features in the interior spaces.

Every work of art that features in Villa della Quercia is the result of a collaboration with Milan contemporary art gallery The Pool NYC. Artists whose pieces are included at the hotel were also invited to experience the resort before creating their work.

“Each area of the villa has its own identity, feeling and texture,” continued Reveria Studio. 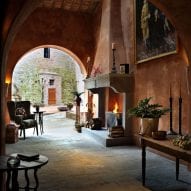 Other renovations in the living area include elegant sconce lights and rustic-looking green chaise longues, as well as a retro alcove featuring a petite but decadent drinks cabinet.

The headboard of the villa’s only bed was also upholstered with decorative fabric that contributes to the eclectic atmosphere of the rooms.

Reveria Studio also renovated the outdoor terrace of hotel’s Italian-Japanese L˜ARIA restaurant as part of the project, which involved changes such as dining tables clad in the same local marbles that were used in the villa, and large sun umbrellas that shade guests from the harsh sun.

“The redesign is a balance between intimacy and sociability, Italian and oriental culture, tradition and marine style,” said the studio.

Led by Laura Delfina Sari and Diego Paccagnella, Reveria Studio is an architecture, interior design and styling studio based in Milan.

Other projects at Lake Como include Villa Molli by architect Lorenzo Guzzini – a moraine stone house with an infinity pool that overlooks the water.

The photography is courtesy of Reveria Studio.

The 15 Best Compost Bins To Buy Online in 2022 Reviews

Asian Inspired Home Interiors With A Sense Of Peace

The Dream Home Kit: It is finally here!