Amorphous windows illuminate the cavernous interior of this pilates gym, which designer Wanmu Shazi has created in the Chinese port city of Xiamen.

The interior of TT Pilates, which is set inside a high-rise office building, was designed to distance visitors from the hustle and bustle of their urban surroundings.

“Pilates is a unique exercise that enables people to focus on themselves,” Shazi explained.

“Through physical and mental training, people are able to enter another state of consciousness completely different from daily life and recharge their batteries. Such exercise needs an immersive, introverted space.”

With this aim, the designer focused on using soft colours and materials to mimic textures found in nature.

A mixture of micro cement and beige paint was used to form a rough, stone-like layer over the studio’s walls and ceilings.

This fake rock finish also covers most of the studio’s expansive steel-framed windows, leaving only a few organically-shaped openings so that visitors can catch glimpses of the skyline beyond.

“Standing in the tranquil space and looking down at the bustling outside world through window openings evokes a transcendental experience,” said Shazi.

These openings, along with those made in the ceiling to accommodate spotlights, cast bright patches of light onto the wooden floors. 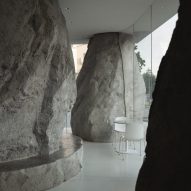 Rocky surfaces also appear in the bathroom with its huge trough-style sink, which rises up from the ground like a boulder.

And in the entrance area, wooden stools shaped to resemble pebbles allow visitors to sit down while changing their shoes.

“Many people said the studio looks like a cave but actually, at the beginning of the design, no particular style or form popped into my mind,” Shazi explained.

“Instead, I just hoped to create a pure space that reveals a natural, immersive and serene vibe.”

Just beyond the studio’s two main classrooms is a drinks bar where visitors can relax on plump white beanbag chairs.

One of the room’s walls is punctuated with arched windows looking through to an outdoor courtyard, which features an exotic tree surrounded by a shallow pool of water.

A thick ledge running around the perimeter of the pool allows visitors to sit and submerge their feet on warmer days.

Wanmu Shazi isn’t the only designer to create cave-like interiors in recent months.

Images are courtesy of 1988 Photography Studio and A Qi.