Watch part three of the AHEAD Global 2021 hospitality awards

The winners of the AHEAD Global 2021 hospitality design awards are being announced in a series of virtual ceremonies broadcast on Dezeen. Watch the third part above.

The events are hosted by Sleeper Magazine‘s editor-at-large Guy Dittrich and feature imagery of the AHEAD nominees, as well as content from the sponsors of the awards programme. 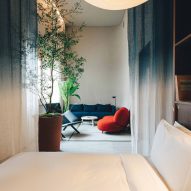 Watch part two of the AHEAD Global 2021 hospitality awards

This year the winners are being announced over the course of four virtual ceremonies, taking place daily from 11 to 13 January with a final broadcast on 20 January in which the winners of the People’s Choice and Ultimate Accolade awards will be revealed.

On Tuesday, the winners of the Bar, Club or Lounge, Event Spaces, Guestrooms, Hotel Renovation & Restoration and Hotel Newbuild categories were revealed.