The ground floor of the red-brick villa serves as a coffee and pastry shop for Black Star Pastry, which is famous for selling a Strawberry Watermelon Cake that was dubbed “Australia’s most Instagrammed dessert” by the New York Times.

Shanghai-based Linehouse designed the space to evoke the feeling of being in space.

“The ground floor stirs up the incredible sensation of being aboard a spaceship,” said the studio.

The studio covered the walls of the cafe in stainless steel shelving that holds thousands of meteorites.

The shelving extends across the ceiling to form an arched form that the studio described as “an exploration of gravity vs weightlessness”.

The phrase “we are all just stardust” can be found lining the edges of the communal tables, creating an effect of each letter dripping off the edge of the table by gravity.

Elsewhere on the ground floor there are retail areas stocked with coffee beans and apparel. 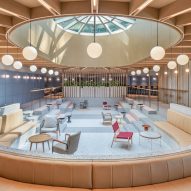 The ceiling is lined in a metal grid. The floor is a rough concrete cast terrazzo tile, giving the space a hint of wildness and creating a museum-like mood for the art.

The gallery can be used as a tearoom in the afternoon and a cocktail lounge by night.

A private room named There There is separated from the main dining area by a deep blue velvet curtain. It contains an intimate bar wrapped in acid-etched blue metal.

Blackened wood covers the floor of the room in contrast to the exposed concrete of the cafe’s other spaces. A stainless steel curved backdrop holds the wines on display.

Black Star Pastry was founded in Sydney, Australia in 2008 and is the creator of the Strawberry Watermelon Cake, the world’s most Instagrammed cake according to the New York Times. This is its first store outside of Australia.

Linehouse was named emerging interior designer of the year at the 2021 Dezeen Awards. Recent projects by the studio include the conversion of a Shanghai office block’s swimming pool into an additional workspace and a contemporary dim sum restaurant in Hong Kong.

The photography is by Jonathan Leijonhufvud.