Automated liquid filler machines are used to pack various liquid items such as oils, milk, and beverages in their bottling plants. But these machines are costly and not affordable by most small bottlers. This simple liquid dispenser releases a litre of the liquid each time the button is pressed.

Block diagram of the dispenser shown in Fig. 1 illustrates its main stages.

In standby mode, the bi-colour LED emits red colour and the valve is de-energised. Every time button S1 is pressed, the valve gets energised and the liquid releases from the solenoid valve. The bi-colour LED blinks in green colour to indicate that the liquid filling is in process.

When liquid flow reaches the predefined quantity, the valve is de-energised by the MCU and now the bi-colour LED emits red colour to indicate that the filling process has been completed.

This cycle repeats whenever the button is pressed. Button S2 is used to manually reset the MCU.

The flow sensor has a rotor along with a Hall effect sensor in the line of liquid passage. When liquid flows through the sensor, the rotor rotates. This causes the Hall effect sensor to output a pulse. Thus, the rate of flow (Q) can be measured as follows:

But we want the quantity in litres and not the flow rate in litres per minute. By rearranging the above equation for litres, we get:

Number of litres=Number of output pulses/450

That means, it takes 450 pulses to flow one litre of liquid through the flow sensor.

The source code is developed using Arduino IDE. By default, Arduino IDE does not support ATtiny85 MCU. So, we need to add ATtiny board to Arduino IDE as follows:

After this is done, open ToolsBoardBoard Manager. After opening Boards Manager, scroll down the list and find ‘attiny’ by Davis A. Mellis. Click on that and install it. After installing it, the ATtiny will be listed in the Boards menu.

By default, the ATtiny85 runs at 1MHz. To make it to run at 8MHz, select ToolsBurn Bootloader option. Make sure that Arduino Uno board is programmed as ISP, and it is connected with the ATtiny85 through ISP pins as per Table 1. Upload the source code Simple_Liquid_Dispenser.ino by using the same Arduino board programmed as ISP. 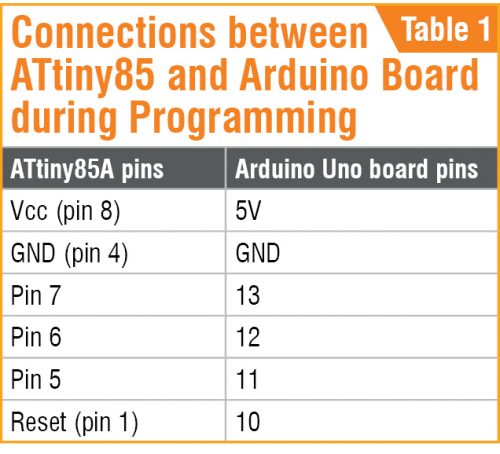 An actual-size PCB layout for the simple liquid dispenser is shown in Fig. 3 and its component layout in Fig. 4. After assembling the circuit on PCB, enclose it in a suitable plastic box. Install the flow sensor and solenoid valve according to your application.

Source code will be updated soon.

A. Samiuddhin, a circuit designer, is B.Tech in electrical and electronics engineering. His interests include LED lighting, power electronics, microcontrollers, and Arduino programming.