Architecture and design studio DDAA Inc has made minor tweaks to an 86-year-old house in Japan‘s Nagasaki prefecture to turn it into an office for ceramics brand Maruhiro.

The converted home is situated in Hasami, a historic area that first began producing porcelain pottery more than 400 years ago during the Edo period.

As well as accommodating Maruhiro‘s office, the building now houses a showroom, an artists’ residence and a kitchen.

This will eventually be used to prepare food for visitors of Hiroppa – a public plaza that DDAA Inc is working on nearby.

“It can be said that one of the characteristics of Japanese housing is that it does not peak at the time of completion but can gradually change its appearance according to the situation,” the studio explained.

“This Japanese house was no exception.”

To conserve budged in light of the pandemic and retain the character of the original home, Tokyo-based DDAA Inc made only a handful of alterations on the interior while the exterior has gone completely untouched.

“When this project was just starting, the Covid-19 calamity was also spreading worldwide,” the studio explained. “But the client decided to continue the project.”

“As the future was unpredictable, DDAA proposed what we could do with half of the original budget.”

Near the building’s entryway, the studio removed the latticed wooden framework and translucent paper overlay from a traditional shoji screen and instead inserted a circular mirrored panel to divide the space.

In Maruhiro’s main workroom, the studio has lowered the floor, revealing the large, craggy rocks that were used to secure some of the house’s structural posts. 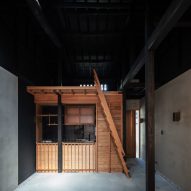 The original tatami-mat flooring was abandoned in favour of concrete due to concerns over wear and tear from office chairs.

A glass-topped communal desk has then been placed at the centre of the room, supported by thickset blocks of concrete.

Here, too, the latticing and paper have been stripped back from the room’s yukimi-shoji screen – a specific type of shoji with a bottom half made of glass, allowing people to look through to the outdoors.

In the room that now serves as the artists’ residence, existing tatami mats were pulled up and replaced with lauan plywood floorboards. The same wood has been used to partially line the room’s walls.

DDAA Inc was established by Daisuke Motogi in 2010. After competing against hundreds of other entries, the studio’s Maruhiro office was among five projects to be shortlisted in the small workspace interior category of this year’s Dezeen Awards.

The category was ultimately won by architecture practice Sher Maker’s self-designed studio in Thailand, which is decked out with locally sourced materials and faces onto an open-air courtyard.

Photography is by Kenta Hasegawa.