Canadian practice D’Arcy Jones Architects has mixed modern additions with historical quirks inside its self-designed studio, which is housed within a century-old building in Vancouver.

The seven-storey Lee building, where the architect’s office is located, was constructed between 1911 and 1912 as an early example of a mixed-use development, combining apartments, offices and commercial shops.

Since then, the building has fallen into the hands of different owners and undergone various modifications. But, according to D’Arcy Jones Architects, it still retains some of its original charm.

As part of the renovation, the studio set out to highlight the fact that the Lee building has a past that goes back more than a century.

“Vancouver’s building culture has always favoured renewal, so it does not have many old buildings,” said the practice, which was founded in 1999.

“As a critique, the goal of this renovation was to celebrate past ways of building through contrast and emphasis.”

The renovation works were carried out in two phases, with the first phase tackling the main staff workspace. This involved removing any recently installed fittings or fixtures and replacing them with panels of clean white drywall.

These panels are juxtaposed against a strip of the building’s rough structural shell, which D’Arcy Jones Architects left exposed to appear as an “archaeological artefact”.

A new jet-black kitchen suite is located at the rear of the space while a long work desk takes over the central area.

Leading off from this space is a small library stocked with architecture and design books that staff can look to for inspiration.

A second workroom is designed to have a slightly more pure, sculptural form, constructed with the help of more drywall panels. 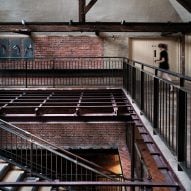 Set at an angle, these help to create faceted walls while effectively hiding the piping and sprinkler systems.

Where the building’s wooden floorboards were deteriorating, the practice replaced them with hand-troweled concrete, which subtly rises and dips to accommodate imperfections on the original floor underneath.

The room’s time-worn concrete ceiling and aged brown floor tiles from 1911 were retained to offset some of the practice’s modern additions such as the white cabinetry that runs along the back wall.

There is also a communal table crafted from glue-laminated timber and overhead lamps that were made bespoke.

“The project articulates a more nuanced stance on what re-use can achieve within a culture that prioritises the new,” D’Arcy Jones Architects said.

“History and modernity can be woven together in many creative fields but only architecture lets the two co-exist, obviously and simultaneously autonomous.”

The self-designed studio was shortlisted in the small workspace interior category of this year’s Dezeen Awards.

While four other projects were in the running, the category was ultimately won by architecture practice Sher Maker’s self-designed studio in Chiang Mai, Thailand, which is arranged around an open-air courtyard. Judges described the project as being “a workplace people dream about since Covid”.

The photography is by Sama Jim Canzian unless stated otherwise.