Huge boilers, chimney-style columns and chainmail-fringed doorframes feature inside the central London showroom of bathroom brand Coalbrook, which has been designed by local studio Holloway Li.

The retail space is situated in the city’s Clerkenwell neighbourhood, set inside a former tobacco-pipe factory now known as The Market Building.

Coalbrook‘s products are showcased across the building’s basement and ground floor, which also house a handful of co-working rooms where architects and designers are invited to hold meetings with clients.

For the interior design, Holloway Li drew on Coalbrook’s origins in the village of Coalbrooksdale in Shropshire, which played a significant role in the Industrial Revolution through its extensive production of high-quality iron.

In reference to this, the studio incorporated a number of industrial decor features and other details that nod to the 1800s.

The ground level, for example, is interrupted by a series of floor-to-ceiling metal columns, shaped to resemble the tall chimneys that protrude from manufacturing plants.

Some of Coalbrook’s showerheads and knobs are displayed around the outside of the columns while the faucets are presented on squat metal stands with inbuilt basins.

Set against the expansive, street-facing windows are panels of amber and fluorescent-red resin, which Holloway Li has modelled after Victorian bathroom walls.

“The traditional form of the cast, with decorative cornice and moulding detailing, cast tiles and a sash window, is subverted by the materiality of the resin, which appears almost liquid,” explained the studio’s co-founder Alex Holloway.

“The resin ‘dematerialises’ the form of the cast, at points appearing crystalline, ethereal or fluid depending on the viewer’s position and angle of light.”

Chain metal hangs from circular pendants and architraves around the showroom’s wide-set doorways.

Most surfaces on the ground floor are painted in a pale grey hue while the basement was given the darker, moodier ambience of a subterranean engine room. 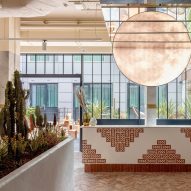 This lower level is accessed via a stone staircase carved from a single block of limestone.

The edges of the staircase were hand-chiselled on site, with the lower treads made to look particularly craggy as if “hewn from the ground itself”.

The basement otherwise accommodates a couple of cavernous boilers with their hollow interiors used to display more of Coalbrook’s products.

Cast iron iterations of the moulded resin panels from upstairs can also be seen here.

“The pink-hued room is a contemporary reinterpretation of a traditional drawing room while the blue-hued room is designed as a library, each room a world within a world.”

Holloway Li was founded in 2015 and is led by Alex Holloway and Na Li. Not too far from the Coalbrook showroom is the Bermonds Locke hotel, which the studio completed in October of last year.

The photography is by Nicholas Worley.