The Whale apartment in Paris riffs on art deco design

Mirror, brass and simple geometries feature inside this Parisian apartment by local architect Clément Lesnoff-Rocard, which offers an understated take on art deco.

The 65-square-metre flat, nicknamed The Whale, is tucked away in the basement of a residential building in the city’s 16th arrondissement.

According to Lesnoff-Rocard, the apartment had undergone a renovation in recent years, leaving it with “perfectly tasteless” interiors that were a pastiche of the building’s original art deco style.

Most of the rooms also seemed dark and cramped, the architect explained, with unsightly plasterboard used to conceal the home’s technical systems.

Given carte blanche by the client, Lesnoff-Rocard completely stripped back the apartment by rendering a majority of its surfaces white and tearing down its false ceiling, revealing a network of unexpectedly chunky concrete beams.

“The disproportion between the enormous size of these structural elements and the smallness of this apartment sent the space to a much larger dimension,” he explained.

“It’s like we were hidden inside a much larger, surreal animal.”

This contrast in scale is what ultimately gave the project its name, The Whale.

“My first intuition was obviously to work from the DNA of art deco, not by literally copying it like the previous renovation had done but by questioning it in today’s context,” he explained. 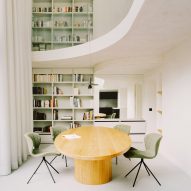 The doors that lead through to the sleeping quarters are clad in mirrored panels while storage cabinets are crafted from reflective brass and one of the structural columns has been replaced with a block of pale blue marble.

In the living room, spherical pendant lights with half white, half black shades have been suspended from wires strung across the ceiling.

Behind graphic gridded partitions lies the kitchen, where the same blue marble has been used to create a breakfast island.

A number of features in the apartment also nod back to the project’s name. Among them is a circular shuttered window connecting two of the rooms, which can be opened and closed to “blink” like a huge whale’s eye.

Other projects by the architect include The Island, a double-height home in the Parisian neighbourhood of La Défense that is arranged around a central courtyard.

The photography is by Simone Bossi.