Bricks envelop inside and outside of New Delhi showroom by Renesa

Indian studio Renesa has used earthy-hued masonry to form the entire facade and interior of a brick manufacturer’s showroom in New Delhi.

The retail space was conceived for local company Jindal Mechno Bricks, which has been producing bricks, tiles and pavers for more than 50 years.

Renesa designed the showroom as a celebration of the humble brick, which the studio describes as the “most resilient fundamental of construction”.

In this spirit, the entirety of the showroom’s facade is hidden behind reddish-brown bricks with blackened splotches.

The exterior is punctuated by a number of small square windows, with the bricks laid concentrically around them.

Masonry also covers every surface of the showroom’s interior, which Renesa said was designed to make customers feel as if they have “dived into the chambers of a classic brick kiln”.

Slim bricks have even been used to create a barrel-vaulted ceiling.

As the bricks were fired at different temperatures, they vary in tone to create a mottled effect.

The colour of the bricks is also subtly altered by the sunlight that streams in through the front windows, sometimes casting them in a pale, peachy hue while at other times making them appear beige or blush pink.

“Bestrewed in a lyrical concoction of a gamut of earthy hues and laying patterns of brick bonds, the venue has allowed the bricks to become the true-blue protagonist in the spatial scheme,” explained the studio.

Jindal Mechno Bricks’ products are presented inside square niches on the rear wall, designed to echo the windows on the showroom’s exterior. 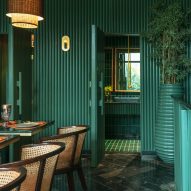 A selection of bricks are also showcased on the thick brick plinths that rise upwards from the floor.

Beyond the main display area lies a bathroom, a small office and a pantry where staff can grab drinks and snacks.

This is not the first time that Renesa has made extensive use of brick in its projects.

The studio, which was founded by architect Sanjay Arora in 2006, has previously used hollow terracotta blocks to create striking room dividers for a home decor showroom in the city of Amritsar in northwestern India.

Other projects by Renesa include a surreal board games bar in New Delhi and a day-to-night restaurant in Punjab with green granite interiors.

The photography is by Niveditaa Gupta.