A luxury hotel with sweeping views across the rooftops of Paris has been built within a historic building close to the Louvre that once served as a post office.

Under the creative direction of hotelier Laurent Taïeb, the opening of the Hôtel Madame Rêve follows nine years of renovation work inside the Louvre Post Office by Dominique Perrault Architecture.

Completed in 1888 as France’s largest post office, the building is located in the First Arrondissement at 48 Rue du Louvre – a five-minute walk from the famous art museum of the same name.

The hotel, which opened in October 2021, occupies a large portion of the building, offering 82 rooms and suites as well as two restaurants and green rooftop space.

The remainder of the building is set to become shops, a post office, police station and day care centre.

Taïeb used a motto of late French designer Andrée Putman, “life must be golden”, to influence the colour scheme for the interiors, designed with the help of Bruno Borrione.

He also designed several furniture pieces for the spaces with marbled and golden-brown tones, and called on a collection of Parisian artists and designers to create or contribute works for the hotel.

“I wanted to tell this story by drawing on unparalleled French know-how,” said Taïeb.

“From the ground floor, it was necessary to express the language of volumes, to rediscover the creative breath of glassmaker Emilie Gallé and cabinetmaker Louis Majorelle.” 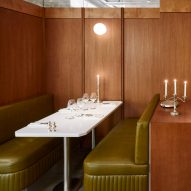 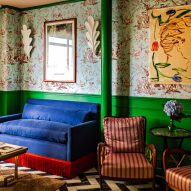 Artworks by French artists were commissioned for several of the hotel’s main spaces. In the grand cafe, where chandeliers hung from the eight-metre-high ceilings are based on the Vienna Secession art movement, artist Olivier Masmonteil painted a mural.

The ceiling fresco in the upper-level La Plume restaurant was completed by María José Benvenuto, while portraits by Inès Longevial decorate the bedrooms, which have a more contemporary aesthetic.

Angled walnut panelling is installed behind the headboards, while velvet curtains draw across windows that frame the Parisian skyline.

In the bathrooms, mosaic tiles in various shades of pink create a speckled effect that stretches across the walls and floors.

As one of the world’s most popular tourist destinations, Paris has no shortage of accommodation options for design lovers, including the colourful Hotel Les Deux Gares completed last year.

Visitors to the city can enjoy other recently renovated historic buildings, including the La Samaritaine department store overhauled by SANAA, and the Bourse de Commerce, transformed into an arts institution by Tadao Ando.

The photography is courtesy of Hôtel Madame Rêve.

How to Make a Live Photo a Video?