Architect Paolo Sarra and studio Punto Arquitectónico have transformed a historic residence in southern Mexico into a bed and breakfast filled with regional materials such as chukum and palm.

The Refugio Bajo Las Hojas – or Shelter Under the Leaves – is located in Campeche City, which is deemed a World Heritage Site due to its colonial-era architecture. The city lies along the Gulf of Mexico.

The 220-square-metre hotel is found in the historic Guadalupe neighbourhood. The project involved transforming a family home into a bed and breakfast for both local and out-of-town visitors.

The project was designed by Mexico City architect Paolo Sarra and the firm Punto Arquitectónico, based in the city of Mérida.

“The design premise was to generate versatile, coexistence spaces and to create an identity for the project through its materiality,” the team said.

Occupying a long parcel that is just five metres wide, the hotel is composed of four volumes and interstitial open spaces. The layout was guided by the shape of the lot as well as local regulations that required the original circulation scheme to be preserved.

“The order of these volumes follows a traditional sequence of a residence,” the architects said.

A reception area is found in the front, street-facing volume. Here, visitors encounter their first look at the project’s material palette – chukum, wood and palm.

Chukum, a natural type of stucco, was used as a finish, while wood was used for partitions, shutters and furniture. Palm was used for decor such as lamps, rugs and cushions.

“The chosen material palette is characteristic of the area and has been used throughout history in the region,” the studio said. 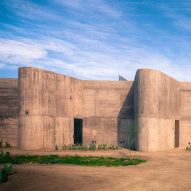 “Through tonality, warmth and texture, each material fulfils its own function unifying the spaces,” it added.

Just behind the first volume is a single-storey building that can be adapted to different uses, including eating, working and dancing. Adjoining this space is an open area with a small swimming pool and a distinctive stone wall.

The guest rooms are housed in a two-storey structure next to the pool. Meant to be simple and cosy, the rooms feature woven light fixtures and earthy colours.

The final volume, which contains service functions, is found in the rear of the property.

“Together, this sequence of volumes seeks to make the user experience very organic and complete as a refuge within the city,” the team said.

Other projects by Punto Arquitectónico include a renovated residence in Mérida that has stone walls, a refurbished cistern and an irregularly shaped swimming pool.

The photography is by Fabián Martínez.

JOB: Test Engr I At Honeywell In Bengaluru