Traditional details were kept throughout this ground-floor apartment in Montreal that local studio Naturehumaine renovated to bring in more natural light and create an improved connection to the rear yard.

Originally built in the 1920s, the apartment was filled with classical details such as ornamental columns and a stained-glass doorway at the entrance of the home.

It is located in Little Burgundy, an area with working-class roots that has undergone a transformation in the past several years.

Not only did Naturehumaine keep these details, they drew inspiration from them to complete their contemporary overhaul of the apartment.

“The intervention tends to preserve the original character and several existing decorative elements to draw subtle inspiration from them,” Naturehumaine explained.

The 1,500 square-foot-apartment (139 square metres) encompasses three bedrooms. As is typical in many Montreal apartments, the common areas are laid out as an enfilade on one side of the home, separated from the bedrooms by a corridor.

“The layout was reconfigured around the primary need to open the apartment from front to back while maintaining the existing wall pattern as much as possible,” the architects explained.

In the hallway, a new green cabinet provides extra storage and is the first indication of the refresh that visitors see when they enter.

At the back of the home, the dine-in kitchen enjoys direct access to the yard through new sliding glass doors. The green hue of the cabinets matches the apartment’s existing stained glass doors.

“The ‘green water’ shade influenced by the colors in the stained glass and the ceramics found in the existing vestibule becomes one of the key elements of the overall architectural concept,” Naturehumaine explained.

The kitchen also features curved cabinets and a rounded kitchen island, which the architects say facilitates the flow of the space. 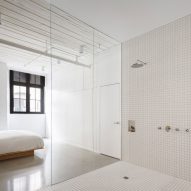 A wall of rounded wooden slats separates the kitchen from the dining room. According to the team, these were inspired by two ornamental columns found in the living room.

The architects extended this approach to the bathroom, which features similar curved walls and is covered in new white tiles but incorporates a restored clawfoot tub at its centre.

Naturehumaine has completed several renovations to existing apartments in Montreal. For another project that combined two floors of an existing building, the team added a new plywood staircase to connect both levels, which includes a hidden play area for the owner’s children.

When tasked with renovating a mid-century house, they added a plant-covered wall in the centre of the home.

The photography is by Ronan Mézière.