The Design Museum‘s latest exhibition Waste Age has a carbon footprint of 10 tonnes, equal to what the average UK person emits in a year, according to a sustainability assessment by environmental collective URGE.

The audit was commissioned by the museum for its latest show, which opened on Saturday ahead of the COP26 climate conference and posits that eliminating waste is the single biggest thing the design industry can do to protect the environment.

Applying the same philosophy to the exhibition itself, the assessment aims to reveal the environmental footprint of a temporary event like this and how it can be reduced.

“We know that while exhibitions have tremendous cultural value, they can be very wasteful,” the Design Museum‘s chief curator Justin McGuirk told Dezeen. “Especially if you’re building walls out of plasterboard and plinths out of MDF, which just get chucked in a skip afterwards.”

Environmental audits chronicling these impacts are unprecedented in the museum sector, according to the report’s co-author Sophie Thomas, who previously conducted a similar sustainability assessment for the Dezeen Day conference.

“It may not seem like a big step for a museum to crunch the carbon data like this but as a designer who has worked both in exhibition design and in sustainability for decades, I can say this amount of scrutiny on the detail really is,” she argued.

“This was a first, in the same way the figure we did for Dezeen Day was.”

Switch to renewables has largest impact

The initial phase of the audit involved predicting the footprint of the entire exhibition, which amounted to 190 tonnes of carbon dioxide equivalent (CO2e) emissions, before working to reduce this as much as possible.

This involved tracking the volume of email communications by the organisers, working with contributing designers to gather data from their complex supply chains as well as looking for scarce historical figures on similar exhibitions.

“This is the first-ever footprint done for the Design Museum,” Thomas explained. “We went back into historical data sets where we could, mainly in electricity and waste tonnage.”

“But nothing had been done before for an exhibition, neither at the Design Museum nor could we find anything to really compare it with from other museums.”

URGE‘s audit estimates that the museum was able to reduce the show’s carbon footprint to 10 tonnes of CO2e, which is around as much as the average person in the UK emits per year, although emissions from deconstruction will only be calculated once the show closes in February 2022.

According to Thomas, this “massive reduction” can mostly be attributed to the Design Museum’s decision to switch to renewable energy in 2017 after moving into its new Kensington site, which brought the footprint down by 95 per cent.

These savings are only theoretical, as all of the museum’s exhibitions for the last four years were also powered by renewable energy. But the audit marks the first time that the associated carbon savings have actually been calculated.

Due to the external servers required to exchange 11,000 emails and 11 gigabytes of data in the process of organising the Waste Age, digital communications still generated one tonne of CO2e, accounting for 10 per cent of the entire footprint so far.

The largest waste and emissions savings were made in the design and build of the exhibition, courtesy of London studio Material Cultures.

The practice worked with URGE to reuse as much material as possible from previous Design Museum exhibitions, before supplementing them with low-impact construction materials that could be reused or left to biodegrade without causing harm to the environment.

Modular display plinths, designed by Assemble for the recent Charlotte Perriand retrospective, were reincorporated into Waste Age, and paired with recycled plastic signage and a wall made of unfired adobe bricks. 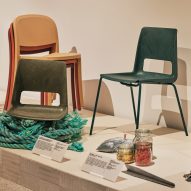 Stacked on top of each other without fixings, these bricks can easily be disassembled and returned to the brickmaker for use in other constructions, while leaving them unfired saves six tonnes of CO2e.

“The fact that they’re raw means that there’s no energy expended on firing them,” McGuirk explained.

However, since some of these bricks might go on to be fired for future projects, part of these emissions are merely delayed rather than completely avoided.

Using cross-laminated timber frames for the remaining partitions instead of a traditional aluminium system saved 1.9 tonnes of CO2e, equivalent to roughly 20 per cent of the total footprint.

But this was negated by the need for 4,800 stainless steel decking screws to hold the construction together.

“The stainless steel screws actually added in another 1.2 tonnes, so it’s all about the balance,” said Thomas, who conducted the audit alongside fellow URGE member Alexie Sommer and data analyst Ralf Waterfield.

According to the audit, the build accounts for 80 per cent of the footprint to date. But the aim is to improve these numbers for future exhibitions.

“It really forced us to rethink the way we do things,” said McGuirk.

“From now on, they have a benchmark to compare to,” Thomas added. “And it is an ambitious one, too.

“We want to see the same processes done for all shows from now on, and not just here but in all museums around the UK and the globe.”

As awareness about the environmental impact of our internet infrastructure grows, a number of other businesses including Dezeen and design studio Formafantasma have overhauled their websites, making code improvements, changing fonts and switching to dark mode to reduce the associated emissions.